﻿…and opens another medical drone centre at Mpanya

President Nana Addo Dankwa Akufo-Addo has called on Ghanaians, especially political leaders, not to toy with health issues by playing politics with it.

“Incessant politicisation of all issues does no credit to Ghanaian politics, health, like several other aspects of our national life, knows no party colours”.

The President, who was inaugurating the latest Zipline medical drone distribution centre at Mpanya, in the Mampong municipality of the Ashanti Region, said he was so far impressed with the delivery of Zipline, and charged them to make the remaining drone centres operational as soon as possible, so that many more health facilities can benefit from the drone service.

He said government had invested heavily in the health delivery system of the country to make health facilities more responsive to the health needs of the people, and cited ambulances procured as one example of the investments the government was making in the health sector.

General Manager of Zipline, Daniel Marfo stated that more than 1,300 aerial deliveries of medical supplies had been done across the Eastern Region since the inauguration of the first Zipline centre in Omenako.

He said the centre at Omenako was serving 52 health facilities, while the latest one at Mpanya would serve 16 facilities from day one, with the addition of more facilities within weeks.

Mr Marfo said by April 2020, Zipline would be making deliveries to some 2,000 health facilities across the country.

Director General of the Ghana Health Service, Dr Anthony Nsiah-Asare, praised the successes of Zipline since they started their operations, and hoped that referrals and death toll, due to lack of essential medical products, would reduce drastically because of the impact of Zipline’s work.

US Ambassador to Ghana, Stephanie Sullivan, emphasized the role of the United States in making the drone service a reality, and mentioned her country’s commitment to partnering Ghana to ensure the health and wellbeing of her people.

Ghana’s medical drone delivery service is currently the biggest in the world less than a year after the service was first launched in the country.

Zipline was officially launched in Ghana in April, 2019, to transport medical essentials to various health facilities across the country.

The launch followed the completion of the infrastructure with successful trials of the drones in the Omenako centre near Suhum in the Eastern Region.

Many inhabitants, mostly females, who interacted with this paper, were excited about the life-saving potential of the technology, and hoped it would be maintained to serve its purpose. 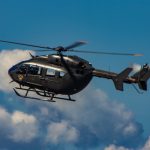