A new research project which aims to develop a system of crawling robots and driverless boats to quickly repair offshore wind farms has been given £4.2m in government funding from Innovate UK.

The project involves organisations including the universities of Bristol and Manchester, as well as Wootzano, a British company developing an electronic skin for robots.

Engineers hope to use Thales’ Halcyon autonomous boats as well as drones which can survey any damage to the wind turbines and lift crawling robots on to the turbine’s blades.

The project, which will run for two years, is using BladeBUG robots, which use suction pads to crawl along the turbine blades. The Royal College of Art Robotics Laboratory is developing a robot arm which can be fitted onto the robots in order to repair the turbine blades whilst the devices cling to them.

If successful, the project could save the average wind farm around £26m in repair costs over the course of its lifetime, researchers said.

Martin Bourton, principal project leader at Plant Integrity, said: “The moment when an autonomous mothership and robotic crew sail in UK waters will be a world-first – and likely a game-changer for the offshore, oil and gas and defence industries too. Some of the technologies are more fully-developed, such as the autonomous vessel, but robotics is at a more experimental stage.”

Will GPS ever become obsolete? Meet the ant-inspired tech that could replace itUncategorized 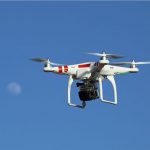