After a woman was fatally struck by a piece of building facade that fell from a Midtown building last week, a group of elected officials are backing a plan to legalize drones to perform building inspections.

At the request of Brooklyn Borough President Eric Adams, Brooklyn City Councilmember Justin Brannan said he plans to introduce two City Council bills early next year related to drone technology. One would require that an initial drone inspection be done within 48 hours of a facade-related 311 complaint or Department of Building violation, while the second would authorize the New York City Housing Authority to use drones for initial facade inspections on NYCHA developments.

Although the Federal Aviation Administration approves restricted flights by registered drone pilots, the use of drones is currently illegal in most of New York City. Last year, Brennan, whose Brooklyn district includes Bay Ridge, Dyker Heights, and Bensonhurst, proposed a bill that would remove the outright ban and authorize some city agencies, including the Department of Transportation and New York Police Department, to oversee some permitted uses. The NYPD already deploys drone technology for certain purposes, including for search and rescue and inaccessible crime scenes.

“Government in the 21st century can no longer be reactive; it must be proactive," Adams said in a press release. "The new legislation I am introducing with Councilmember Justin Brannan will make building inspections more cost-effective, saving building owners and the City millions of dollars, it will help us take down sidewalk sheds that often stay up for years, and most importantly, it will keep New Yorkers safe."

Concerns about the inspection process of the city's building facades heightened after Erica Tishman, a 60-year-old architect, was killed last Tuesday while walking in front of an office building on 7th Avenue. In April, The property owner, Himmel + Meringoff Properties, was cited by the DOB for failing to property maintain its terra cotta facade. Poorly maintained terra cotta facades have a history of causing fatal accidents in New York City. Over the years, the DOB has noted that the weaknesses of the material can be difficult to spot and require an up-close examination. Preservationists have maintained that most property owners fail to do sufficient upkeep of terra cotta.

Adams and Brannan, who held a press conference on Sunday on the steps of City Hall, argued that drones can be a cost-effective solution for property owners and the city. To date, Councilmember Robert Cornegy and Ben Kallos have pledged to sign on as co-sponsors of the bill.

Allon said he was confident that the assessment would show that drones were the cheaper solution.

The legislation would likely require cooperation from the NYPD. "The integration of drones into New York City’s airspace for legitimate purposes needs to be done through a thoughtful and deliberative process that acknowledges their legitimate use, while also recognizing that they are used by terror organizations to attack targets and cause mass casualties," a police spokesperson wrote in a statement.

Andrew Rudansky, a spokesperson for the DOB, said in a statement that the agency agreed "that the safety of all New Yorkers should be the top priority" and that its staff would review the proposed legislation.

In the wake of the accident, the DOB did a sweep of roughly 1,300 buildings across the city that had been ordered by the agency to have immediate repairs made and to install pedestrian protections. Rudansky said the agency planned to propose rules requiring building owners to perform more detailed, up-close facade inspections, as well as greatly increase penalties for owners who fail to fix unsafe facade conditions.

On Sunday, a New York Post story reported that there are more than 5,300 open citations citywide against buildings for "failing to maintain safe exterior walls." Open violations, however, do not necessarily indicate unsafe conditions for pedestrians. 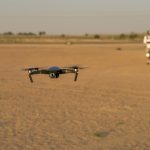 Man lands in court for flying drone at high…Uncategorized