An easier way for drones to take flight

While many in the general aviation community worry about drones flooding the National Airspace System — and wreaking havoc — drone pilots operate under rigorous requirements to obtain authorization before taking flight in controlled airspace.

And a new FAA program is making the authorization system more efficient and speedy.

Before the nationwide implementation of LAANC in 2018, pilots of unmanned aerial systems (UAS) — commonly known as drones — who wanted to fly in controlled airspace had to file a request on the FAA’s DroneZone website.

This process, which is still available, involves filling out a very detailed form describing the nature of your request. For drone pilots it wasn’t the hassle of filling out the form that was exasperating, but the extremely long delays in processing each request. While 90 days was considered the “normal” processing time to receive a yay or nay, many cases took even longer.

That led the FAA to introduce LAANC, which provides almost instantaneous processing of airspace authorizations in controlled airspace.

The benefit to professional drone pilots was a huge leap forward. If they have a client requesting an aerial mission in controlled airspace and they need the flight performed tomorrow, there was almost no way you could get a manual authorization processed in time. But with LAANC, you can get the job done.

Under the FAA UAS Data Exchange umbrella, the federal agency has contracted with a number of companies to handle the authorizations.

Many popular drone apps have been approved to provide LAANC services. Some of these include AirMap, Kittyhawk, Skyward, DJI, AltitudeAngel, and more. There are other companies approved for LAANC as well, with more in the works.

When you submit a request through an app, it checks your request against various information, including NOTAMs, facility maps, and Temporary Flight Restrictions (TFRs). If your request is approved, you will get your authorization to fly — and an approval code — within a few minutes. 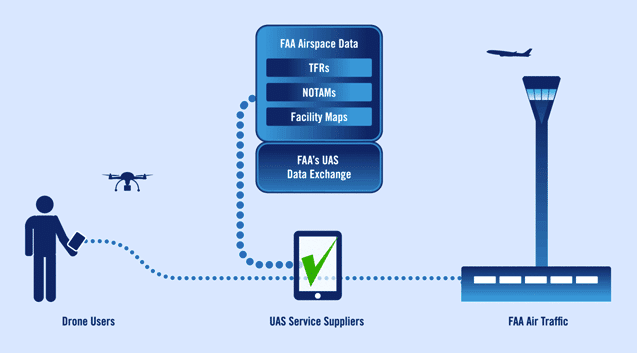 LAANC is available at nearly 500 airports at 300 air traffic facilities across the U.S. You can find the full list of airports on the FAA’s website.

Take note there are still some airports not covered by LAANC and those still require the manual approval process.

Where is This Heading?

LAANC could be considered one of the early, evolving steps in the development of better traffic management for drones.

Effective, efficient approvals is a key to encouraging proper operation in the National Airspace System. It also accelerates the safe integration of drones into the system.

As we see more industries adopt drones into their workflow, long delays are minimized by this technology. This translates not only into safety and better drone traffic management, but also increases the ability to expand business with the quicker turnaround of aerial projects in countless areas. 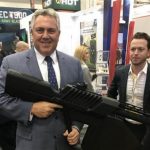