The Australian Federal Police are seeking ongoing authorisation to use so-called drone-jamming capabilities that can be used to disable remotely piloted aircraft systems (RPAS) and similar unmanned aerial vehicles (UAVs).

Drone jamming devices target the frequencies used by an operator to control a drone, which generally leads to the drone either landing or returning to the point where it was launched.

The AFP has been working closely with the relevant regulator — the Australian Communications and Media Authority (ACMA) — to seek an exemption from rules governing wireless interference.

The former deals with frequencies used by satellite navigation services such as GPS (radionavigation-satellite service, or RNSS). The latter bans mobile phone jammers (a ‘PMTS’ is a public mobile telecommunications service).

Last year the ACMA issued temporary authorisation for the AFP to employ drone-jamming devices as part of providing security for the Invictus Games in Sydney.

The regulator authorised the AFP to use anti-drone measures in ‘temporary restricted areas’ declared by the Civil Aviation Safety Authority (CASA) under the Airspace Regulations 2007.

The authorisation, which expired in early November, exempted the AFP from rules that would otherwise prohibit the use of devices that could be used to disrupt drone control systems that employ the 2400-2483MHz or 5725-5850MHz bands.

The ACMA is currently considering a potential two-year exemption for the AFP that would allow the law enforcement agency to quickly deploy drone-jamming capabilities at short notice.

The exemption would apply to RNSS jammers — although the devices the AFP intends to use aren’t intended to jam RNSS frequencies, according to the ACMA they are prohibited devices because they are capable of RNSS jamming. The prohibition on PMTS jammers would remain, and the AFP would not be authorised to disrupt drone communications that used RNSS frequencies for control.

The ACMA has acknowledged that the AFP capabilities could interfere with a wide range of services, including Wi-Fi networks and bands that are designated for use by industrial, scientific and medical (ISM) applications.

“Given the ubiquity of Wi-Fi and other devices authorised by the class licence, we have considered that these are the devices that would be most likely to be affected by incidental interference caused by activation of the jamming device,” the regulator said in a document seeking input on its proposed exemption for the AFP.

The ACMA has indicated that its current view is the public benefit of being able to disrupt a drone, which would be expected to take place over a relatively short period in a confined area, outweighs the potential adverse impact.

An AFP spokesperson told Computerworld the organisation would seek to deploy counter-RPAS capabilities, including drone jamming, in a “variety of operational circumstances” — those could include “the protection of major events or places of mass gathering, programmed police operations, or in response to an incident”.

In addition to interfering with frequencies used to control UAVs, counter-drone systems can offer detection capabilities that use technologies such as radar, infrared, RF, audio and visual scanning to locate and identify drones.

The AFP spokesperson said that to “protect the integrity of its operational activities” the organisation would not comment “on operational methodologies or the full scope of its capabilities”.

Last year Queensland Police were equipped with MkII DroneGuns, manufactured by ASX-listed company DroneShield, as part of an effort to disrupt unauthorised drone flights during the Commonwealth Games on the Gold Coast.

In December, around 1000 flights were delayed or cancelled at Gatwick Airport after drone sightings. The airport’s chief operating officer, Chris Woodroofe, recently told the BBC that it was an unprecedented “malicious” and “criminal” incident.

The Senate Rural and Regional Affairs and Transport References Committee has previously called on the government to undertake a concerted push to strengthen Australian drone regulations.

Among the recommendations of the committees’ report on the issue were that the Civil Aviation Safety Authority in cooperation with the Australian Federal Police and other relevant authorities “prohibit the use of remotely piloted aircraft systems in the airspace above significant public buildings, critical infrastructure and other vulnerable areas”.

In November, the government issued a response to the report saying it agreed in principle with that recommendation. 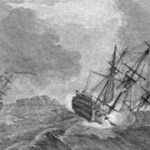 What do drones and GPS owe to a 1744 shipwreck?Uncategorized