The CrocSpotter technology has been developed by a multi-organisation team combining drone tech, artificial intelligence and cloud computing into a flying eye in the sky that can spot a crocodile in murky waters with much greater accuracy than a human.

Drone company Westpac Little Ripper developed its drones to spot swimmers in trouble. It then worked with software developers to come up with a shark-spotting algorithm.

It has now adapted its system again, this time to spot crocodiles in rivers and on beaches in tourist areas of northern Queensland.

The team unveiled the technology at the World of Drones Congress in Brisbane on Thursday with a live feed from a drone flying near Cairns, more than 1600 kilometres away.

It didn’t quite go off without a hitch – while the human operator spotted a crocodile swimming in the Mowbray River, the croc-spotting algorithm didn’t flag it, however it did flag some other crocodiles once the presentation had finished.

The chief executive of Little Ripper, Ben Trollope, chalked it up to “Murphy’s Law”, but also insisted that was why it was still in the trial phase, after spending eight months adapting their AI.

“That’s the technology. We’ll now go back and keep training the AI, make it smarter, and issue an update and roll it out,” Mr Trollope said.

“In relation to the Australian coastline, we’ve got one of the most dynamic in the world, and the artificial intelligence has been processed through a range of different environments. We’re at 93 per cent accuracy.”

In contrast, he said, a human spotter has an accuracy of about 12 per cent to 17 per cent, although Jason Argent from Surf Life Saving Queensland said there were no plans to remove humans from the equation.

“At the least, you’ve got to still have a pilot flying the drone with line of sight, so someone is always watching,” Mr Argent said.

“The AI in this case will just draw their eyes to something it thinks looks like a crocodile, and they can take action from there.”

The trial will begin incorporating the croc-spotter AI to its fleet of 17 drones over the next month, with the aim that it will be actively used by lifesavers this summer.

It will be used in a series of specific locations, including Four Mile Beach in Port Douglas and some beaches through the Cairns area, with potential to roll it out across crocodile habitats around Townsville and Mackay.

The AI at the centre of the technology was developed in conjunction with the University of Technology Sydney, and one of the main developers, Professor Michael Blumenstein, said they adopted it from their earlier program designed to spot sharks in northern NSW.

“This software is custom and can be trained. After an arduous training regime, we can teach it to recognise things that we want it to look at,” Professor Blumenstein said.

“Detecting a shark is actually relatively easier than detecting a croc because sharks tend to swim in clearer water, so they have better contrast for the AI to spot.”

Rounding out the tech team was the involvement of Amazon Web Services, which enabled the AI to be cloud based rather than housed on individual drones.

The computing power required for the AI would make it infeasible for it to be carried on board a drone, however high-quality wireless connections and cloud computing mean each drone can simply connect to the CrocSpotter network.

The rollout of CrocSpotter is also supported by the Queensland Environment Department under its CrocWise program.

Meanwhile, the SharkSpotter application is still used in NSW, although there are reportedly no plans to introduce it in Queensland.

Stuart Layt covers health, science and technology for the Brisbane Times. He was formerly the Queensland political reporter for AAP. 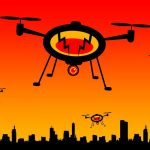