While the world watched in shock as part of Notre Dame cathedral burned, few realized the surprising roles machines played in the incident. Sadly, a possible computer glitch may have been responsible for the fire. But technology was also crucial to the recovery efforts. French firefighters used DJI drones to survey the blaze and assess their attack plan — something a Paris Fire Brigade spokesperson said was important in saving the historic building. And a water cannon-manned robot named Colossus also helped battle the raging fire.

When talking about dream future drone applications at a Techcrunch AI and robotics event held at UC Berkeley on Thursday, DJI head of U.S. research and development Arnaud Thiercelin shared his obsession with the idea of fighting fires with drones in what he refers to as an “aerial aqueduct.”

“I have my group of people laughing about it on the internet, but I’ve done my homework, and the idea is to use a fleet of drones — thousands of them working in a constant chain that are continually going and fighting — in collaboration with other drones that collect data and low Earth orbit satellites. This is what I really am excited about, and I’m seeing the pieces from different industries coming together to create that type of solution,” he said.

The idea to use more drones in firefighting first occurred to Thiercelin about a year ago when exploring ways drones can carry water to overcome drought in California, he told VentureBeat in a phone interview.

Today, an increasing number of fire departments and state fire authorities use drones to supply visuals that help firefighters do their jobs. DJI currently sells drones equipped with cameras and thermal imaging to fight fires that assisted crews in Santa Rosa and Paradise in California.

Telepresence drones are even being tested by the San Diego Fire Department. Computer vision systems deployed on the edge — alongside actions by robots and drones — could drastically change the way people fight fires in the future.

Thiercelin predicts his approach to fight fires could be made in the next 3-5 years, and envisions a time when truck loaded with drones in a box accompany fire crews.

Then groups of drones using computer vision to collect data and stitch together imagery would be needed to assess the position of firefighters, other people, and the fire line. Predictive systems that can project the fire line in 8 hours while taking into account historical and weather data can then assess. Those predictions can then automate drones to drop fire suppressant or water.

Flight automation akin to Intel’s swarms of light drones would be necessary to coordinate activity and eliminate the need for human pilots.

“The idea here is to simplify the collaborative work of 1,000 drones by having an automatic system where you can create at a command center level a simple application that visualizes the position of the firefighters, their health metrics, the line of fire, and the predictive patterns to see where it’s going to go,” he said.

A number of approaches may be developed in the years ahead, and such trends could even lead to a day when we no longer consider it moral or safe to send a human being into a burning building.

Aerones cofounder Dainis Kruze bemoaned the risk to human life of current firefighting practices during his pitch as a semifinalist in the Slush 100 startup competition in Helsinki, Finland last December.

Aerones designed and developed the drone in Latvia, but the company is now based in San Jose, California. Instead of using battery or gas power as other heavy-duty drones do, Aerones’ drones are fed water and electricity from the ground.

Today, Aerones focuses on building cleaning services and on the cleaning, maintenance, and de-icing of wind turbines, but Kruze said the company is in talks with multiple fire truck manufacturers to develop new solutions.

Since the company’s drones draw their power and water from the ground, its makers say the drones can reach heights of up to 70 stories in one minute and sustain activity for 30 minutes. The above video was shot by fire and rescue crews in Aizkraukle, Latvia in 2017. 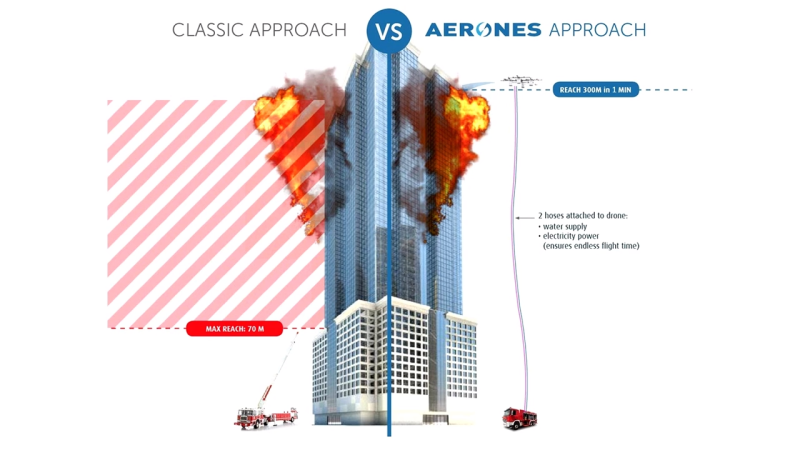 Another firefighting drone sold today is Walkera. The China-based company has sent 200 of its drones to firefighters working with the Chinese army, a company spokesperson told VentureBeat.

Zhun can use an airborne fire extinguisher to spray fire retardants through a carbon fiber pipe. The drone can also use a 9X scope and rocket launcher to shoot a six-pound projectile into a burning building. The “bombs,” as Walkera refers to them, can be shot 130 feet.

As the video below demonstrates, the projectile can be shot to break a window or screen glass door and then spread its dry powder.

The drone also has a night vision camera, lidar, and high-definition camera. Unfortunately, the gas-powered drone can only fly for up to 35 minutes. 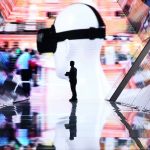