Drones ease the backbreaking work of the Kingdom’s farmers

By
Posted July 31, 2019
In Uncategorized
Drones ease the backbreaking work of the Kingdom’s farmers2019-07-312019-07-31https://mdpair.com/wp-content/uploads/2017/04/mdpair-logo.pngmdpAIRhttps://mdpair.com/wp-content/uploads/2019/07/the_15kg_drone_can_carry_20_litres_of_liquid._it_is_equipped_with_gps_and_five_different_types_of_electrostatic_sprayers_suitable_for_different_crops._supplied.jpg200px200px
0 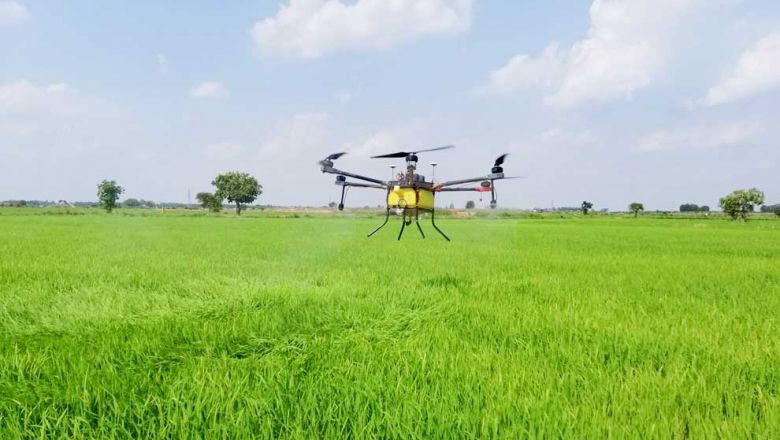 The 15kg drone can carry 20 litres of liquid. It is equipped with GPS and five different types of electrostatic sprayers suitable for different crops. Photo supplied

Drones ease the backbreaking work of the Kingdom’s farmers

Having witnessed first-hand the dangers faced by humans when spraying pesticide, IT graduate Heng Sopheak decided to quit his job to research and create pesticide spraying drones that are already being put to work in several of the Kingdom’s provinces.

Called the Sprayer Drone, or Sprayer Unmanned Aerial Vehicle (UAV), Sopheak’s agricultural drone offers a major innovation for farmers in the Kingdom, where agriculture remains the major industry for inhabitants of rural areas.

Hailing from the rice growing and cashew nut producing province of Kampong Thom, Sopheak completed his bachelor’s degree in Information Technology at Norton University in 2003.

While working in IT and human resources for a garment factory in Phnom Penh, he began researching agricultural drones, building his first one last year.

“I became interested in agricultural drone technology and saw its potential use in Cambodia. Eventually, I decided to quit my job and focus on it."

“I understand how hard farming is. To plant things is difficult, but to take care of them is even harder. I’ve seen some people hesitate to take jobs spraying pesticides, fearing they might get poisoned. I’ve seen farmers missing their spraying plan because the rain made the dirt roads difficult to transport heavy equipment,” Sopheak said.

Working from his apartment in Kouk Khleang village on the outskirts of Phnom Penh, drone components are scattered across Sopheak’s living room floor, ready to be pieced together to form a fully functional agricultural UAV.

“If I am able to get all the necessary hardware parts that I need, it takes me about a week to make one [UAV),” he said.

The 15kg drone can carry 20 litres of liquid. It is equipped with GPS and five different types of electrostatic sprayers suitable for different crops.

Sopheak said that most of the parts needed to build the UAV are not locally available, meaning their construction is a matter of patience and skill.

“Unfortunately it is quite challenging when it comes to finding the right parts and components to make this agricultural drone in Cambodia. After nearly one year building these drones, I still find the technical process of building, in terms of both hardware and software, complicated,” he said.

He said it has also proved challenging to convince farmers to try the new technology as they are unfamiliar with it.

“Our farmers call it funny names, like little sprayer plane or little sprayer helicopter,” the 38-year-old joked. “Some farmers doubt if the new technique will work as they usually use about 200 litres of pesticides for spraying, but the drone only holds about 20 litres. But it has the capacity to cover 1ha of crops in just 10 minutes; we use an electrostatic sprayer so all they see is just a light mist coming out of the drone.” 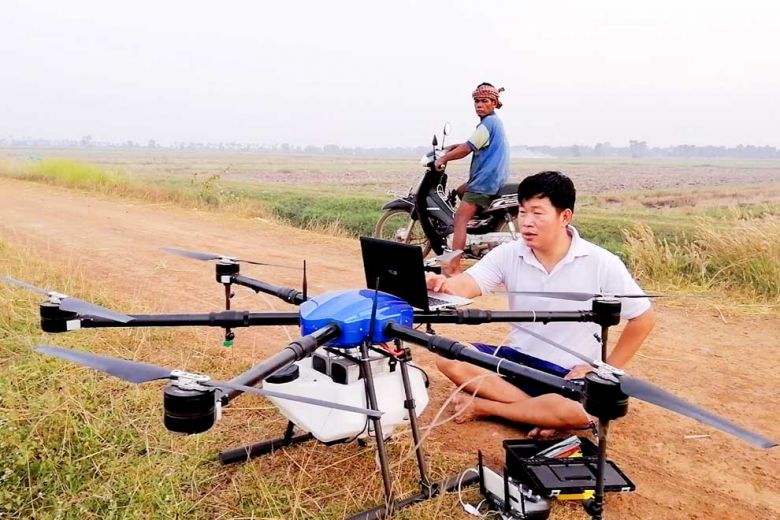 IT graduate Heng Sopheak (pictured) quit his job to research and create pesticide spraying drones that are already being put to work in several provinces. Photo supplied

“The amount of pesticide powder is the same, but we just dissolve it in less water. It is a high concentration pesticide solution,” he explained.

“This means it has less of an impact on the environment. It works well within an area without wasting the spray outside the borders, reducing the amount of chemicals needed. The UAV can also be used in the dark as it is equipped with a light,” he said.

Sopheak said that in addition to helping by removing human sprayers from being exposed to the pesticides, the drone is also more efficient and less prone to mistakes.

“When it come to work done by humans, sometimes we can be a bit careless. With a drone we cannot make any errors; it works according to the map we draw and height we set. When it runs out of liquid, it automatically marks the last stop point and flies back. After the refill, it starts at the last stop,” he said.

Sopheak currently travels around the Kingdom providing his commercial pesticide services for farmers, charging between 40,000 to 100,000 riel ($10 to $25) per hectare, depending on the type of crops and geography.

He finds that crops grown on hillsides are the most challenging for his drone.

“Though it can be used with almost all types of crops and land, ones [situated] on a slope are a bit risky. Even though we can equip the drone with an FPV camera and terrain-following radar to assist with the flying, it is still not the most effective for plants growing high on the hillside,” he said.

“The number of people booking my services for commercial use keeps increasing, while only few people are interested to buy and use it on their own,” he said, adding that only farmers with enough money are interested in purchasing their own.

“The agricultural drone costs between $6,000 and $20,000 depending on its size. None of my products are available in the market, but a farmer can place an individual order,” he added.

Sopheak is also looking into the drone being used to dispense fertiliser and for seeding purposes.

“I’ll keep studying and researching more about the drone being used to spread seeds, monitor crops, treat crops, analyse soil and for irrigation,” he said.

Sopheak says that the future for farmers in the Kingdom could prove bright if technology is harnessed to make the industry more efficient.

“The future of farming will be more efficient and have higher yields if our farmers adapt to new technology. I believe in the near future, drones will make agriculture less labour-intensive. I’m also positive about the growing support from our famers, both old and young, who are catching up with the tech development and making good use of it,” he said.

Drones to get off ground at Husker Harvest DaysUncategorized 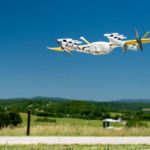