Drones to get off ground at Husker Harvest Days

The drones are coming. Actually, they are already here. Unmanned aerial vehicles, or drones, are being used for new applications across the agriculture sector.

Like so many technologies that have originated with the military, UAVs have become tools of the trade for farmers and ranchers, no matter if the devices are quadcopters, hexacopters or fixed wing.

UAV demonstrations began at Husker Harvest Days in 2015 in the southeast quadrant of the show grounds, just across South Shuttle Road from Syngenta Square and the antique farming exhibits. Again this year, UAV demonstrations will return, allowing manufacturers and marketers a chance to demonstrate and discuss their systems and unique applications and services for producers.

“Farmers are still learning different applications for UAVs,” says Greg Austin, chief consultant at FullField Ag and coordinator of the HHD UAV demonstrations. As a certified pilot, Austin knows all about the rules and regulations governing UAV use in agriculture.

“If you’re an existing private pilot, you can get a remote pilot in-command certification on the Federal Aviation Administration website in about 20 minutes,” Austin says. “I’m hoping several UAV systems can be demonstrated at this year’s show. We invite vendors to bring their UAVs to demonstrate some of the applications and services they can offer.”

The application opportunities are enormous. “Drones allow producers to get a close look in their fields in season to see if their irrigation patterns are uniform,” Austin says. “If there is a wind or hailstorm, UAVs can actually be flown to within a foot off the ground to see if the corn is actually snapped off from green snap or just bent over. It can allow a producer a close look at the crops in the middle of the growing season without driving down any of the crops.”

While the interest in UAVs has been high over the past few years, growers are still learning about the technology. “The cost has come way down,” Austin adds. No matter what is going on out in the field with the crop, UAVs offer a bird’s-eye view, allowing producers to adjust their management based on what is viewed from the UAV.

Producers who want to gain more knowledge of UAV systems and learn about the differences in UAVs and the applications they have for their own farms can stop in at the UAV demonstration site at HHD. Demos will be held throughout each day of the show, weather permitting. 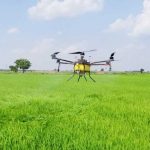 Drones ease the backbreaking work of the Kingdom’s farmersUncategorized