Drones used to help rescue teams save lives on hills

THEY have led to growing concerns over the risk to aircraft safety and the impact on personal privacy. But one mountain rescue team believes drones could help lives and prove to be a crucial device when it comes to search and rescue efforts.

Lochaber MRT, based in Fort William, is already using the aerial technology to assist in its work in remote parts of Scotland and wants to train more of its team members to operate drones.

The team used a drone last week to help find a female climber who had injured a leg on Sgurr a’Bhuic, near the Nevis Range ski slopes on Aonach Mor.

Meanwhile, it also deployed one over Glen Nevis to create a 3D image of the wild country around the glen, which is the final stretch of the hugely popular West Highland Way and close to some of the most frequently visited mountains in the land.

It is thought two hillwalkers who went missing two years ago might have got into difficulty in the area.

Eric Cyl, 62, originally from Kilmarnock, was last seen heading off into the Mamore mountain range near Fort William at the end of May 2015.

Meanwhile, Tom Brown, 65, from Lanarkshire, has not been seen since he left his home a month later.

A drone was originally used in a search for Mr Cyl involving Police Scotland and mountain rescue teams soon after he disappeared.

Lochaber MRT now hopes to use its equipment in a wider search of the more inaccessible parts of Glen Nevis as it continues efforts to trace the two men.

John Stevenson, of Lochaber MRT, said: “We expect these will become standard procedure from now on where conditions allow. We have put two people through an operator’s course and will be putting more through in coming months.”

The rescue team also used the technology last week to help in the rescue of climbers in difficulty on a route on Ben Nevis called Long Climb.

However, the cloud level was too low to make full use of the drone.

Mr Stevenson said: “On Long Climb we used the UAV (unmanned aerial vehicles) to try and locate the climbers so we could advise the guys on summit the line of the lower. Unfortunately, cloud level did not allow full deployment.

“On Sgurr a’Bhuic we had a female with a leg injury and the drone was deployed to locate the casualty – because there was no phone signal in this location – so the stretcher party could go straight casualty.” Mr Stevenson said the drone allowed the team to look into remote and difficult to access areas on its patch.

In Canada, Ontario Provincial Police say they use drones regularly for search and rescue. With a growing fleet currently consisting of 13 drones, the force described the devices as “spectacular technology”. In the west of the country Emergency Management BC (British Columbia) has also approved a pilot project to use drones in search and rescue.

The use of drones by untrained people in the UK has caused some controversy and there have been several reported instances of drones coming close to aircraft.

Guidelines state drones are supposed to be kept “well away” from airports and landing strips and should always be within the sight of a pilot and below 400ft to avoid any potential collisions. Those caught flying drones dangerously face an unlimited fine and up to five years in jail. 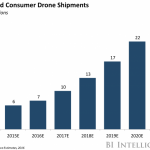 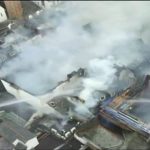