Looking for some f150 mods cheap? This stubby antenna for your f150, or other truck? I was. I did a few missions with my truck in some areas that had low lying branches. While they didn’t do paint damage, the antenna was catching them and causing them to fling back hitting the truck harder. The antenna was also getting whipped. I decided to research either an antenna delete or a stubby. I decided to go stubby since there would be a gap where the antenna was.

I found a few options, some included a bottle opener for around 27.00. I went ahead with the cheapest option at 19.00 and went with the 4-5 inch size. Which you can find here:

Installation took nearly 5 minutes. That is it. The package comes loosely separated, antenna and threaded rod to attach to your truck. Make sure you match the thread size to your truck. One side is fine and the other coarse. For this application, I did not put any thread lock onto the stubby antenna F150 mod. Instead, I realized that it will take a lot of travel for it to come out of the socket. Hand tightening as seen in the video is all you need. If you do want a little more tightness I suggest using a cloth or lid gripper from the kitchen. Don’t overtighten though.

I really like the shorter look. It does draw attention and a quick, that’s neat since it nearly deletes the longer stock antenna. There is no performance drop that I can notice from shortening the antenna. Get one yourself on Amazon: http://amzn.to/2rkQQAQ So if you’re looking for F150 mods cheap, this is your best option. functional, and sleek. Want to see more of our items for sale?

Check out the store where you can get drone parts, mods and other fun products to better your experience flying. Subscribe to our youtube for more videos and reviews
Our Photography Youtube here 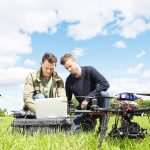 Commission is taking the European drone sector to new heightsUncategorized