It turns out that Facebook’s onetime plan to build huge drones that would relay wireless networks to parts of the world without widespread access to high-speed internet, Project Aquila, isn’t the only odd method the company has explored in its quest towards world e-domination. According to a recent report in Business Insider (paywalled), Facebook worked on a since-canceled project titled “Catalina” that would use much smaller drones to help boost wireless speeds.

A source told the site Catalina “began in late 2017 or earlier” and continued past end of Aquila in June 2018. Named after Santa Catalina Island, a landmass off the coast of California that at one point used pigeons for communication with the mainland, the project entailed fixed-wing drones “closer in size to a sparrow than an eagle” that would use high-density solid-state drives to ferry data to users who might find it prohibitively time-consuming to stream it over slow connections. Business Insider wrote:

… Facebook had planned to first test it with content for its core apps like Messenger and to eventually expand the airborne service to third-party apps like YouTube and Netflix — an indication as to how Facebook’s Connectivity efforts act as a vehicle to drive user growth and engagement on Facebook as much as to improve access to other internet services.

It’s not really clear from the report how this would have worked—as Engadget noted, the concept appears to imply that the drones would “relay information between traditional mobile infrastructure from afar and people’s phones,” while the Verge suggested they would act as a mesh network. However, the report is light on both technical details and how well the project worked, other than that the Facebook team dubbed the drone model a “pigeonet.”

The Aquila drone’s demise came after reports of serious technical problems, with two known tests reportedly resulting in damage during landings. Critics had speculated whether the plan was really a good use of Facebook’s resources, as opposed to more traditional methods of building out internet infrastructure. While Aquila itself was scrapped, Facebook said it would continue to focus on the underlying connectivity technologies for possible use on other manufacturer’s aircraft. Later, it was reported to be working on a project to test small, low Earth orbit satellites that would provide internet access to underserved areas.

As Business Insider noted, Facebook has used other methods to try and expand into places where internet infrastructure has not yet reached a high stage of development, including its Free Basics program offering a walled-garden version of the internet to users, rural wireless access program OpenCellular, and a program called “Street Feet.” That one apparently entailed approaching locals in emerging markets like Bangladesh and Tanzania, a source told Business Insider, and trying to persuade them to create Facebook accounts.

Facebook axed its bird-size internet drones before they even flewUncategorized 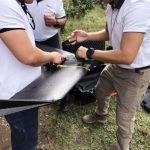