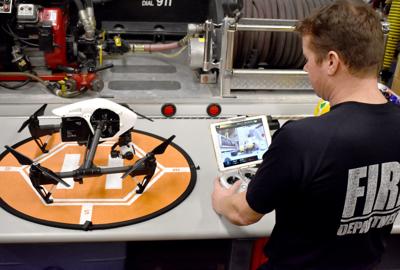 Years later, their aviation skills have been put to use in different capacities that intersect through drone technology.

Jennings, originally from Milwaukee and a longtime Madison resident, is the senior lead pilot for the University of Wisconsin Med Flight after retiring from the U.S. military in 2010. He is increasingly coordinating with emergency dispatchers about working safely alongside drone pilots.

An increasing number of businesses, authorities and emergency officials are using drones for purposes ranging from vehicle accident reconstruction to inspecting cellular towers from a bird's-eye view.

And while Federal Aviation Administration rules are constantly evolving and complicated for authorities, hobbyists and commercial pilots alike, that fact isn't slowing down excitement about the benefits of a rapidly expanding drone market.

The Wisconsin State Patrol launched its own drone program this month.

Lt. Christopher Jushka said the drones — which cost $2,000 apiece — won't be used for enforcement or surveillance.

Instead, their intended purpose is to assist with search-and-rescue missions, crash-scene investigations and to supplement other tools during emergencies or natural disasters.

Jushka acknowledged privacy concerns exist with drone technology but said his agency does not intend to use the devices for surveillance.

The first drone, purchased three years ago for about $900, has a camera. The second drone with more advanced equipment, acquired in 2018, has an infrared sensor and camera and cost about $12,000. Most funds used for the purchase came from donations, Stoddard said.

Mapping car crashes from the air can open highways more quickly and provide valuable details related to skid marks, road conditions and the directions vehicles traveled after impact, he said.

Drones can cover more ground than officers on foot attempting to locate a lost person, especially at night, by using flares and heat sensors.

Deploying a small radio-controlled craft is easier than calling in an airplane for surveillance in cases of severe flooding.

“We could go into areas with drones where people could be in trouble,” Jushka said.

A disadvantage to drones is a need to monitor battery life mid-flight. Common for many drones used by police, batteries generally allow for about 20 minutes of use. And while drones can sometimes take more detailed images, airplanes are able to fly higher and observe wider angles. 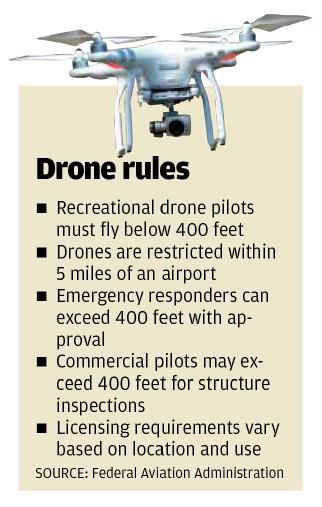 The Wisconsin State Patrol received 170 requests from other law enforcement agencies for aircraft support in 2018. Not all of those could be granted. As drones have become more readily accessible, Jushka said drones can supplement some of those requests.

"It basically gives you air support that we’ve never had in the past," Stoddard said of heat signature sensor capabilities. "We can do our searches at night now, more thorough than we could before.”

The usefulness of drones extends past law enforcement and into emergency response efforts, too.

Dodge County Emergency Management Director Amy Nehls said the Dodge County’s Sheriff’s Office has a drone and some nearby fire departments, including the Columbus Fire Department, have shared drone resources.

When an explosion erupted inside a Beaver Dam apartment complex in March 2018, area fire departments used drones to monitor a controlled burn to destroy latent explosives.

Drones also made it easier to monitor a semi-tanker explosion in Dodge County about three years ago.

“That was not an option a few years ago,” Nehls said. “It helps us in many incidents gain situational awareness.”

Johnson said emergency officials and authorities couldn’t reach some areas during severe and record flooding in 2008 and 2010.

But in the last few years and most recently in April of this year, emergency officials and sheriff’s deputies worked alongside the Wisconsin Department of Natural Resources to monitor floodwater with drones.

That tool came in handy when a decades-old levee south of Portage appeared to be at risk of breaking apart as the Wisconsin River surged past flood stage. Authorities watched the levee from above and urged residents to evacuate the surrounding area.

Johnson said fire and police departments across Columbia County have invested in drones.

One of those is the Portage Fire Department, which has its own drone — fully equipped with thermal imaging to spot heat signatures at night.

The department has deployed the drone to monitor wildfires, photograph buoys on the Wisconsin River and assist the Columbia County Sheriff’s Office during a search-and-rescue mission.

“I think they have a place in fire service,” Simonson said.

Johnson said in an emergency situation drones could be used to monitor burning fuel tanks before a hazmat team is sent in, which could help ensure their safety on scene.

In Dodge County, Nehls said a drone would be particularly useful in the case of a train derailment or volatile chemical spill to protect the safety of both the public and first responders.

The Federal Aviation Administration requires all drone pilots — including police, contracted workers and hobbyists — to register each drone, get licensed and pass routine tests to ensure compliance with federal laws.

One distinction between piloting an aircraft and a drone is altitude restrictions.

The general rule of thumb for people piloting drones for recreation and authorities deploying drones during emergency situations is to fly under 400 feet.

According to the FAA, manned aircraft such as planes or helicopters are required to fly at least 500 feet above the ground in rural areas.

Near cities or suburban settings, manned aircraft must maintain a safe altitude of at least 1,000 feet above the highest obstacle within a radius of 2,000 feet of the aircraft.

Contracted licensed pilots can fly drones up to 400 feet above the top of the tower they're inspecting.

Jennings said although UW Med Flight doesn’t have drones of its own, the pilots sometimes coordinate with emergency dispatchers to know whether drones will be present at multi-vehicle accident scenes or to help locate injured patients more quickly.

Many newly licensed pilots — including some members of the news media — are operating drones instead of manned aircraft, Jennings said.

“There’s a big, multi-mission future for drones, and there’s no escaping that," Jennings said.

Jennings said drone pilots who fail to know or follow the rules may place others in danger.

Before Congress passed the Aviation Reform Act in 2012, air traffic control teams didn't have clear instructions to distinguish between a 747 passenger jetliner and a $5 toy drone, Menet said.

In the years since, specialized rules applied to aircraft under 55 pounds — including most drones.

Drone pilots generally aren't allowed to fly over crowds, on private property or near airports, though pilots can request special permissions in advance from the FAA.

“A lot of drone operators don’t know that stuff is illegal,” Menet said. “They’re starting to come around and be more cognizant of what the rules are.”

But working with the Federal Aviation Administration can sometimes be a headache, and getting special approval to fly in restricted spaces can take several weeks, Menet said.

But if a cornfield is located near an air strip, that could pose issues for farmers who wish to contract with licensed pilots to inspect their land from above, said Charlie Toms, a commercial drone pilot for Edge Consulting Engineers in Prairie du Sac.

To bypass such rules and operate in that airspace, pilots need to apply for special authorization with the FAA, a process that can take several weeks with no guarantee the request will be granted.

Additional business uses can include everything from building inspections to survey and photography to deliveries.

Among some challenges drone hobbyists face is negative public perception.

Some hobbyists wonder where they can fly their drones without people getting upset or asking whether they're following the laws.

Toms said if he wears an orange vest, sets out orange cones and stays close to a cell tower he's contracted to inspect, no one seems to mind.

But someone piloting a hobby-grade drone in a field for fun might receive more pointed questions from people passing by, Toms said.

Toms said he recommends all recreational drone pilots to join local flying clubs sponsored by the Academy of National Aeronautics.

Being a club member means having insurance and a more official organization to fall back on for legal reassurance. This can give drone pilots more confidence to go out and fly, Toms said.

"They’re the future of our hobby," Toms said, particularly for younger pilots. By learning from fellow experienced enthusiasts, new pilots can learn to fly safely, legally and courteously.

Email notifications are only sent once a day, and only if there are new matching items. 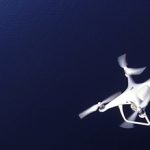