Water-borne diseases appear to be a quintessential problem in the country. A simple solution lies in cleaning large water bodies, which are breeding grounds of mosquitoes. Using AI, IoT and drones, Marut Drones is tackling mosquito menace in a sma…

Mosquitoes are one of the deadliest animals in the world. According to the World Health Organisation, their ability to carry and spread disease to humans causes millions of deaths every year. In 2015 malaria alone caused 438 000 deaths.
India carries a heavy burden of waterborne diseases such as malaria, dengue and chikungunya. In 2017, the country witnessed a 300 per cent spike in cases of dengue, from 60,000 cases in 2009 to 1,88,401 in 2017, as per the data by National Vector Borne Disease Control Programme (NVBDCP) and National Health Profile 2018.
One of the most common breeding habitats of mosquitoes are large water bodies. Water hyacinths, a highly problematic invasive species known for deoxygenating the water and destroying aquatic biodiversity, further aids in the growth of mosquito breeding. “It is essential to initiate control measures round the year, to control the larvae and adult population. Spraying the right insecticide at the right time can give an effective control,” says Prem Kumar Vislawath, co-founder of Marut Drones, which builds drones that sprays insecticides and herbicides on lakes, ponds and other water bodies to eradicate the mosquito population and water hyacinth.
The technical mosquito repellent
Founded in 2018 by IIT-Guwahati alumni Suraj Peddi, Sai Kumar Chinthala and Vislawath, Marut Drones uses a smart way to kill mosquitoes and clean lakes.
The tech firm uses an Artificial Intelligence (AI)-based platform to make assessments on mosquito density, larvae count, create mosquito maps by location, gender, species and subspecies and also offer real-time reports to identify high and low risk areas using predictive analysis.
Vislawath explained that the firm has also placed sensors and Internet of Things (IoT) devices near lakes and ponds, mounted on nearby poles, gates and buildings. The technology provides before and after analytics to measure effectiveness of control measures, gives location wise mosquito population density data and can also give critical alerts on outbreaks of diseases such as malaria, dengue and chikungunya. The sensors can be set up easily and requires very less maintenance and no manual intervention.

Based on the information received through intelligence, drones spray repellents at concerned areas. This organised use of technology to reduce mosquito crisis holds a large benefit over traditional manual spraying.
“With manual spraying, it is almost impossible to cover the entire expanse and reach the middle of a lake which means a lot of mosquito larva is left to fester. The drone, however, is able to reach every part of the surface area that had to be sprayed, from the edges of the lake right to the middle and therefore it could see through a complete eradication of the mosquito infestation,” Vislawath told ET.
He further explained that earlier, it would take 20 workers and about 15 days to cover a 16 acre lake. However, Marut Drones can get an acre sprayed in 10 minutes and have a work rate of 5-6 acres per hour summing up to 25 acres per day. The drones have the capacity to hold 10 litres of spray and flight duration of 20-25 minutes. They are equipped with GPS and radar for uniform spraying.
Saving time and lives
The Greater Hyderabad Municipal Corporation (GHMC), which had been long battling with mosquito menace in Hyderabad, had recently joined hands with the tech firm for a solution. A pilot experiment was conducted in Gurunatham lake in Miyapur during the last week of March this year, which was a remarkable success. The drone sprayed bio-herbicide all over the 16 acre land and mosquito larval density has come down from 41 per ladle (approximately 40 ml) of water to 28. Meanwhile the population of adult mosquitoes also plummeted significantly with just two days of the spraying activity.
The drone spraying was not only less time-consuming than manual spraying, but also prevented the municipal workers, who often had to go knee-deep in lakes, from getting exposed to diseases and skin infection due to water pollution.
Talking about the municipal corporation’s experience with the firm, Rambabu, Chief Entomologist, GHMC, explained that earlier, it would take around 18 people to clean one lake. “No need of such manpower now as we can use the drones, which also cover the entire area in a short time. In case of manual labour, small quantity is sprayed by each labour every time, however, drones can carry a significantly larger amount in each round. Marut Drones is a good initiative and more such sophisticated equipment will give better results,” he said.
Following the success of the pilot project, the GHMC has commissioned the tech firm to clean 50 lakes in the region. So far, Marut Drones have sprayed herbicides and pesticides on 72 lakes in Hyderabad including Mundikunat lake in the Hi-tech city, Gopi Cheruvu, Kudi kunta, and ISB lake among others.
“About two lakh-odd residents in every colony of Serilingampally ward near the Gopi Cherevu lake had an unbearable mosquito crisis. The evenings are so horrific that the helpless local residents stayed indoors,” said Vislawath.
The firm has expanded use of their intelligence-based drones as they come handy in similar operations such as agriculture spraying, monitoring crop and soil health. It is also offering drones for security services for surveillance and tracking thieves.
Mentored by T-Hub and Research Innovation Circle of Hyderabad (RICH), Marut Drones was recently selected for Facebook’s India Innovation Accelerator Programme. The bootstrapped startup raised seed funding from Freshworks co-founders Kiran Darisi and Parsuram Vijayshankar.
Read more onmarut dronesfacebookartificial intelligenceWorld Health OrganisationghmcHot Startups 2020India Innovation Accelerator programmeIoTCommenting feature is disabled in your country/region.Download The Economic Times Business News App for the Latest News in Business, Sensex, Stock Market Updates & More. 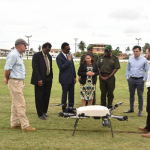