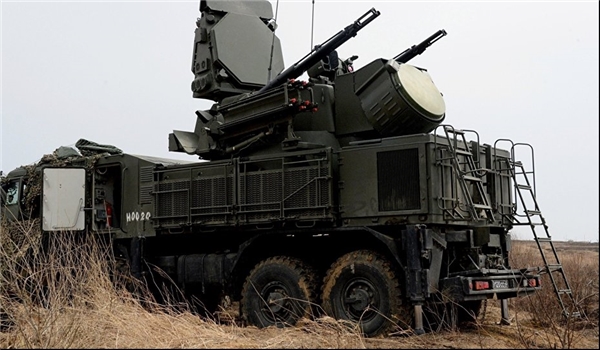 TEHRAN (FNA)- The Kremlin said it is concerned about a report by Russia’s Defense Ministry that a US spy plane was in control of a drone attack on Russia's Hmeimim Airbase in Syria in January.

Kremlin Spokesman Dmitry Peskov made clear that the military has analyzed all available data and has drawn the necessary conclusions before saying that the drone attack on the Russian airbase was directed from a US P-8 Poseidon surveillance plane, RT reported.

“This is undoubtedly a very alarming report,” he noted.

All further details will be provided by the Defense Ministry. But Russian President Vladimir Putin may raise the issue with his US counterpart Donald Trump when the opportunity arises.

The Kremlin's response comes after Colonel General Alexander Fomin, the deputy defense minister, had reportedly addressed the January drone attack during the Beijing Xiangshan Forum, a high-profile conference on defense and security.

According to the top defense military official, 13 unmanned aerial vehicles (UAVs) had approached Russia’s Hmeimim base at the time when the Poseidon plane was traversing skies over the Mediterranean. When Russian electronic countermeasures were turned on at Hmeimim, the drones continued their flying mission in manual mode.

He said the drones were not manned “by some peasant”, they were flown from “a standard, well-equipped P-8 Poseidon”, which had manual control over the UAVs in question.

When these drones came across Russia’s electronic warfare measures, they pulled back from the kill zone and began receiving some commands via satellite communications, General Fomin explained. Someone, he added, “guided the UAVs to the so-called holes [in Russian defenses]”, which they utilized before being downed by Hmeimim’s surface-to-air missiles.

The incident occurred overnight on January 8, involving 10 UAVs targeting Hmeimim itself. Three more drones attempted a strike on the Russian naval facility at the Syrian port city of Tartus. All 13 craft were then engaged by the Pantsir-S1 air-defense system.

Three enemy drones, overridden by the Russian electronic warfare team, landed intact outside Hmeimim and were later inspected by the military. It was the first time that Syrian militants had used remote-controlled top-notch weaponry in the war. The Defense Ministry said the drones had been acquired “only from a country possessing state-of-the-art technologies”.

The Pentagon tried to rebut the Russian allegations at the time, with Spokesman Adrian Rankin-Galloway claiming “those devices and technologies can easily be obtained in the open market”.

The January attack was not the only one of its kind. Russian air defenses at Hmeimim have dealt with intruder UAVs on numerous occasions throughout this summer. No drone managed to get close to the facility.

US-Led Airstrikes Targeting ISIL Kill Dozens of Civillians in Syria Calls for UN Probe
TEHRAN (FNA)- The Pentagon has defended its airstrike and saying it was targeting ISIL militants inside. [VIDEO]

Funeral for Palestinian Teen in Gaza
TEHRAN (FNA)- Funeral of a Palestinian teenager in the Nusseirat refugee camp in the Gaza Strip on Thursday. Israeli troops shot dead 17-year-old Muntaser Mohammed al-Baz in a border clash a day earlier. [PHOTOS]

Saudi Crown Prince Shakes Hands With Khashoggi’s Son
TEHRAN (FNA)- Salah bin Jamal Khashoggi, shaking hands with King Salman and then his anointed heir, the Crown Prince, Mohamed Bin Salman, was a remarkable display of the sustained and catastrophic disconnect between Riyadh and the outside world. As if PR is something you shoot yourself in the foot with. [CARTOON]

Ankara-Backed Militants Weary of Al-Nusra, Admit Necessity for Syrian Army's Control on Demilitarized Zone
TEHRAN (FNA)- Syrian media outlets quoted sources close to high-ranking commanders of the Ankara-backed Ahrar al-Sham militant group, affiliated to the so-called National Freedom Front (NFL), as saying that after weeks of the violation of the Sochi Agreement by the Al-Nusra Front, a Syrian army assault on the groups still operating in the so-called weapons-free zone is now justified.

Hosting Arbaeen Pilgrims by Iraqi People
TEHRAN (FNA)- The Arbaeen pilgrimage to Karbala in Iraq is one of the largest religious gatherings in the world, marking the 40th day after the martyrdom of Imam Hossein (AS) in the seventh-century. Imam Hossein (AS) is the third Shia Imam and grandson of Prophet Mohammad (PBUH). [PHOTOS]

Envoy: Iran to Turn US Sanctions into Opportunity for Entire Region
TEHRAN (FNA)- Iran's new Ambassador to Beirut Seyed Mohammad Jalal Firouznia said that his country is able to turn the US sanctions into an opportunity which can be used by all the regional states.

Envoy: US on Crossroad over Iran
TEHRAN (FNA)- Iranian Ambassador to London Hamid Baeidinejad said that Washington should now choose between losing its credibility by continued violation of the 2015 nuclear deal or returning to the internationally-endorsed agreement.

Ankara-Backed Commander Killed in Infighting in Afrin
TEHRAN (FNA)- Infighting among the Turkey-backed terrorists on looting the properties of civilians in Afrin still continues, local sources said, adding that a terrorist commander was killed in such clashes.

More Civilian Corpses Discovered in Raqqa after US Attacks
TEHRAN (FNA)- Several new corpses of civilians killed in the US airstrikes on Raqqa were found one year after Washington and its affiliated militants occupied the city.

Koreas Officially Start Demilitarizing Border Zone
TEHRAN (FNA)- South and North Koreas have officially launched the demilitarization process of a border village, Seoul said, as part of an agreement to ease tensions on the Korean Peninsula.

Kremlin Alarmed by MoD Report That US Spy Plane Coordinated Drone Attack on Russia's Syria Base
TEHRAN (FNA)- The Kremlin said it is concerned about a report by Russia’s Defense Ministry that a US spy plane was in control of a drone attack on Russia's Hmeimim Airbase in Syria in January.

Report: US Won’t Sanction India over S-400 Deal with Russia… Just Buy American F-16s
TEHRAN (FNA)- Washington has “informally conveyed” to India that it may avoid US sanctions for buying Russian S-400 missile systems, but that comes with a term, namely that New Delhi should purchase American F-16 fighter jets, according to reports. ﻿ ﻿ Sections