MNICS: Drop your drones during wildfire

The 2019 wildfire season in Minnesota has just started and wildland firefighters have already seen evidence of drones flying near wildfires this spring, reports the Minnesota Incident Command System.

While drone technology has increased in popularity, these devices also raise concern for aerial firefighter safety.

The Minnesota Department of Natural Resources Wildfire Aviation program and the Minnesota Incident Command System are issuing a reminder about the use of unmanned aircraft systems.

“They ask the public to drop your drones,” said a news release.

“Most people wouldn’t stop a fire engine from responding to a wildfire,” said Darren Neuman, wildfire aviation supervisor for the DNR. “Flying your drone over or near a wildfire is no different. If you fly, we can’t.”

With increased wildfire activity, the need for fire suppression aircraft also increases. The Minnesota DNR wildfire aviation uses helicopters and air tankers to put out wildfires. During high fire periods, up to 40 aircraft may be on standby or working to extinguish wildfires. If drones are spotted over wildfires, aerial firefighting operations will immediately cease until the airspace is cleared and safe. This can cause wildfires to become larger and more expensive. It also places lives, property, and valuable natural resources in harm’s way.

Firefighting aircraft, such as air tankers and helicopters, fly at very low altitudes. They are typically flying just a couple of hundred feet above the ground, which is the same airspace level as drones. The restricted airspace creates the potential for a mid-air collisions and injuries. “At the end of the day we want to extinguish wildfires and make sure everyone makes it home safe,” said Neuman.

To protect aircraft and keep the airspace open during wildfire suppression, temporary flight restrictions, or TFRs, may be put in place above and extending for 5 miles from wildfires. The restrictions include drones. Members of the public should avoid flying drones over or near wildfires even if a TFR is not in place because of the potential for accidents and the disruption of fire suppression operations. If your drone is caught near a wildfire you could be penalized.

“As we move forward into this wildfire season, let’s be fire wise and fire safe,” urged the release. “No photo or video is worth the risk. Drop your drones near all wildfires.”

Email notifications are only sent once a day, and only if there are new matching items. 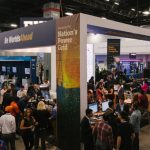 FIU to showcase tech and entrepreneurship at eMerge Americas 2019Uncategorized