The first dedicated police drone unit in the UK has been launched.

Devon and Cornwall Police began testing the drones with Dorset Police in 2015, but have now established a permanent unit with three full-time staff.

It is hoped the drones could be used to track suspects in firearm incidents as well as in counter-terrorism operations.

The unit's six drones have already been used to find missing people and gather evidence to secure court convictions.

It is aiming to have 40 officers complete their Civil Aviation Authority (CAA) drone training and up to 18 drones in operation by the start of 2018.

Some of the drones have a police livery and are equipped with zoom cameras and thermal imaging.

As well as crime scene and road searches, the drones will help scour the forces' 600 miles (900km) of coastline and extensive woodlands to help combat wildlife crime.

Drones have been trialled by other police forces, including Merseyside, Gwent and Kent for various uses including monitoring drug raids and searching for missing people.

Ch Supt Jim Nye, who leads the new unit, hopes the team will be able to shape how other forces used drone technology in the future.

"The helicopter isn't always available and you want to have it available for life-threatening situations," he said.

"I think the public would expect that if we can get value for money with a drone over a helicopter, that we do so."

In November 2016, the UK's drone code was revised and updated to help pilots ensure they fly the gadgets safely. It is:

Drones used to help rescue teams save lives on hillsUncategorized 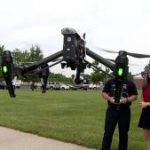 Drones to the Rescue: A new age of public safety technologyUncategorized