Russia’s New, Bizzare B-2 Look-alike Stealth Drone Is up to Something

Russia's New, Bizzare B-2 Look-alike Stealth Drone Is up to Something

The Chkalov satellite imagery indicates Hunter-B has a wingspan of around 50 feet, making it roughly the same size as the X-47B or an Su-34 manned fighter. Size confers volume and hints that Hunter-B, whatever its stealth qualities, might possess a large fuel load and a correspondingly long range.

The Hunter-B drone will be fully autonomous and follow a pre-programmed flight path, according to Russian news agency TASS.

“The Russian defense establishment is promising a test that will include a short-duration 'jump'—the [unmanned combat air vehicle] will rise ever so briefly above the tarmac to test its launching and landing capabilities," said Samuel Bendett, an independent expert on the Russian military.

“The flight will not last for long — several dozens of minutes at the maximum," a source told TASS. “Teams on the ground will intervene if necessary.”

Hunter-B’s much-anticipated first flight could signal the beginning of a long development that could end with the Russian air force operating fighter-style stealth drones.

A flying wing similar in shape to the U.S. Air Force's B-2 stealth bomber, Hunter-B in theory could penetrate enemy defenses to deliver ordnance.

It’s unclear how many Hunter-B prototypes exist. At least one was on the flight line when Russian president Vladimir Putin on May 14, 2019 visited the 929th Chkalov State Flight-Test Center in Russia's Astrakhan region.

What to Read Next 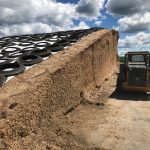