The U.S. Congress tasked the Federal Aviation Administration (FAA) in 2016 with issuing regulations or guidance by July 2018 that could permit the public, the FAA, law enforcement, and others to remotely track and identify drones and their operators during flight.

Senators Edward Markey, a Democrat, and John Thune, a Republican, said such a rule would help address a rising number of unauthorized drone flights.

“Remote identification will enhance safety, security, and privacy, and serve as a critical tool for law enforcement to respond to and address reports of illegal and unauthorized drone operations,” the senators said in a letter to Chao on Monday.

The FAA said on Monday that “drone ID and remote tracking are priorities for the FAA and we are well underway developing proposed rules.” The agency said last month it plans to publish a proposed rule by July 21, having previously vowed to unveil the proposal by May 1.

The regulator has grappled with many complex issues behind identifying drones remotely, with disagreement among industry and various federal agencies over software and hardware requirements and how to address privacy and data security.

An FAA advisory committee issued a report in 2017 laying out options for remotely identifying drones, but did not agree on all recommendations.

Earlier this month, the FAA said it was investigating a drone that hovered over Boston’s Fenway Park during a Red Sox baseball game. The drone’s manufacturer said the user apparently overrode a system designed to prevent flights over prohibited areas such as sporting events.

The drone appeared to be a DJI Phantom, the U.S. unit of Shenzhen, China-based SZ DJI Technology Co Ltd said, adding the “incident shows why the federal government must mandate a remote identification system for airborne drones as soon as possible.”

In January, the FAA said 43 flights into New Jersey’s Newark Liberty International Airport were required to hold after a nearby reported drone sighting. London’s second busiest airport, Gatwick, was severely disrupted in December when drones were sighted on three consecutive days.

Chao in January proposed rules allowing drones to operate over populated areas to help speed their commercial use. The department noted they cannot be finalized “without a remote identification rule in place.”

Last week, Alphabet Inc.’s Wing Aviation unit got FAA approval to start delivering goods by drone in Virginia later this year, making the sister unit of search engine Google the first drone delivery company to get U.S. air carrier certification. The certification is good for two years and has significant restrictions on when and how flights can occur.

Taking down drones is turning into a big businessUncategorized 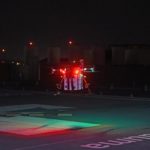