If you're a snowboarder, mountain biker, skateboarder, rock climber or trail runner looking to publicize your adventures, there's a new eye in the sky to add a fresh angle to your videos. The second-generation Skydio 2 carries over the original model's core ability, avoiding obstacles as it follows and records you. But now it's got better navigation, controls, speed, range, video quality and, perhaps most important, a $1,000 price tag instead of $2,500 for last year's first-gen model.

A flurry of interest in drones earlier this decade subsided when most folks realized they didn't really need an expensive flying camera. But people are still interested in capturing adventurous moments, and plenty of them buy GoPros for that reason. That's where Skydio's self-flying R2 fits in: It gives you a perspective you can't get with just a GoPro strapped to your handlebars or helmet.

The Skydio 2 shoots video with a 20mm-equivalent camera stabilized with a three-axis gimbal, but it's also got six fisheye camera eyes solely for navigation. They feed data into the Nvidia Tegra X2 processor that runs the drone's AI scene-processing software. By understanding its full surroundings, the drone can plot a course around buildings and through a forest's trees as it tracks its designated subject.

And people want it. The first production run, due to start shipping in November for those who make a $100 down payment, sold out on Wednesday, the day after the drone was announced, so any new orders now will arrive in 2020, Skydio tweeted. Skydio makes its drones in a building across the street from the head office in Redwood City, California.

The lower price brings Skydio into the reach of drone enthusiasts, while its technology "removes the stress and fear of crashing," Skydio CEO and co-founder Adam Bry said.

"DJI has been super dominant. There's narrative they already won," Bry said. "We think this really challenges that."

DJI gave Skydio a pat on the back but said it's already got tracking and obstacle avoidance technology.

"It's great to see more companies entering the industry and offering unique products," DJI said in a statement. "Automated features like this are incredibly popular with our customers and DJI has been using items like ActiveTrack and APAS [Advanced Pilot Assistance System] for several years now."

As with last year's Skydio drone, you can pilot the Skydio 2 with an Android phone or iPhone. The new model, however, also gets two new controllers, each costing $150.

A two-joystick model offers traditional remote controls for piloting the drone. Your phone snaps in to present a drone's-eye view and offer touch-screen controls. For example, the drone video view overlays a plus sign on each person or car that the drone can see, and tapping that plus sign will select the subject the video follows.

The controllers also let you control the drone from farther away, up from about 109 yards (100 meters) with just a phone to about 0.9 miles (1.5 kilometers) with the beacon and about 2.2 miles (3.6km) with the joystick controller.

Improvements over the first Skydio

The Skydio 2 has several improvements over last year's model:

I tried the Skydio 2, and it works well even for drone newbies. I can't vouch for its low-light abilities, but it had no trouble at a sunny field near the company's headquarters.

I could flick the drone here or there with the beacon. Pushing arrow buttons sent the drone farther or reeled it back in so I could choose the distance I liked.

The drone itself followed me without much trouble as I ran, rode a scooter and biked on a field and among trees. The Skydio 2 can't always maintain its designated position as you steer among obstacles, but it steadily tracked my location and kept me in the video it recorded.

I doubt I'm the only one who isn't adept with joystick controllers. But the Skydio 2's autonomous abilities let me fly it straight at trees or walls without worrying about an actual crash. That self-piloting software meant even I could get the video perspective I wanted.

Update, Oct. 2: Notes that the initial batch of Skydio 2 drones have sold out and adds comment from DJI and 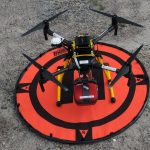 UPS drones have FAA approval, but don’t expect them at your house anytime soonUncategorized