The NYPD planned to use drones during Times Square New Year’s Eve celebration. Then it started raining. 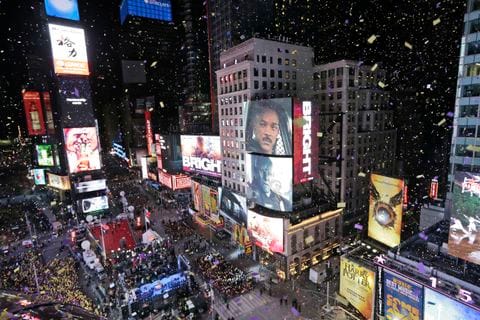 In this Jan. 1, 2018, file photo, confetti flies over Times Square during the New Year's celebration in New York. The New York Police Department is adding a drone this year to its security forces. (Seth Wenig/AP) December 31 at 4:49 PM

Update: After this story published, NYPD officials announced that the department will not use drones during the city’s New Year’s Eve celebration due to inclement weather.

Before they pack into Times Square on Monday night, thousands of New Year’s Eve revelers will pass through the kind of intensive security measures that are normally found inside the nation’s airports.

While the crowd will probably be keenly aware of the heavy police presence, bomb-sniffing dogs and metal-sensing hand wands, there is one critical security measure that may escape their notice.

This year — for the first time in the New York Police Department’s history — officials will have a camera-equipped, remote-controlled quadcopter on hand with the ability to buzz above the exuberant crowd.

The drone’s camera will be one of more than 1,200 fixed cameras being used by police at the celebration, according to NBC’s “Today” show. Compared with helicopters, NYPD officials said, the agency’s drones have the ability to get much closer to the crowd.

Some of the department’s drones have been outfitted with powerful cameras with thermal-imaging and 3D-mapping technology, as well as "strong camera lenses that can greatly magnify a subject,” according to the Associated Press.

“That’s going to give us a visual aid and the flexibility of being able to move a camera to a certain spot with great rapidity through a tremendous crowd,” Deputy Commissioner of Intelligence and Counterterrorism John Miller told the AP.

[This startup’s new passenger drone is ‘like a flight simulator that you can ride in,' CEO says]

In addition to flying its own drone above Times Square, the department will also be deploying counter-drone technology to keep other drones from flying into the area, according to Bloomberg.

Just because the NYPD’s drones are capable of swooping across the Monday night’s crowd does not mean they necessarily will do so. Chief of Department Terence Monahan told the AP the department’s drone will be relegated to “cordoned-off area” and “tethered to a building” to avoid injury if the vehicle falls from the sky.

“Once it’s up in the air, it will probably be hard to see,” Monahan told the AP.

When the NYPD unveiled its new drone program — known as the Unmanned Aircraft System (UAS) — earlier this month, the agency outlined several potential uses for the technology. They include search-and-rescue missions, gaining access to crime scenes that would be inaccessible otherwise, or even being used in hostage situations, according to the department.

The NYPD said there are already more than 900 state and local police, fire and emergency units with access to unnamed aerial vehicles.

“As the largest municipal police department in the United States, the NYPD must always be willing to leverage the benefits of new and always-improving technology,” Police Commissioner James P. O’Neill said, according to the announcement. “Our new UAS program is part of this evolution — it enables our highly-trained cops to be even more responsive to the people we serve, and to carry out the NYPD’s critical work in ways that are more effective, efficient, and safe for everyone.” 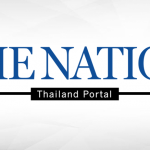 High-tech seen as key to industrial upgrade in ChinaUncategorized
The Drone Trailer: A Drone Gets Possessed by A Deranged Serial KillerUncategorized