Uber tests food delivery by drone in US

Uber and the city of San Diego have been granted Federal Aviation Administration clearance to operate commercial drone delivery as part of the San Francisco-based ridesharing company's Integration Pilot Program (IPP) which was created to test the application of food delivery by drone.

This means restaurants in San Diego will trial the technology which will see orders put into specialised food transportation boxes attached to a drone for delivery. The ridesharing company's app will then locate a space close to a customer's house to land the drone – some landing zones will include on top of cars – and a Uber driver partner will take the order out of the box and deliver it manually to the front door.

Uber began testing food delivery by drone about 10 months ago. McDonald's has since come on as Uber's first restaurant partner to cater to drone delivery. Delivery by drone will be rolled out to other Uber Eats restaurants later this year, including US fine dining restaurant Juniper and Ivy.

The company said data collected from drone delivery will be used as a foundation for the company's planned aerial ridesharing network of flying taxis which will be trialled in Melbourne, Dallas and Los Angeles next year.

Uber Elevate head of flight operations Luke Fisher said it was difficult to commercialise drone delivery particularly in high-density areas, which is why it had not yet been done by a company on a mass scale. To get around this Uber said it would leverage its drivers to collect drone deliveries and subsequently complete the delivery.

Uber has been testing drone delivery with Intel drones but it plans to build its own machines based on insights from the Uber platform and the pilot programme.

"We know the demand is there. We like to think of it as the natural evolution of transportation. Hundreds of years ago people would have never thought about flying across the country or across the world, now it's just natural," Fisher said.

"We're at this inflection point again where we realise this is a natural evolution and that it is coming."

Uber will begin testing its drone technology in San Diego from August. It has no plans to roll out testing to other states this year but believes drone delivery, in the long run, would "dramatically" improve customer experience.

"We're still very early. We are not at a point where we're going to scale and open up drone delivery to the rest of the world."

Fisher said he would be surprised if delivery by drone delivery in some capacity was not commonplace, at least in a limited capacity, within the next five years.

"Six years ago people were talking about drone delivery and that time came and went but now there's a renewed focus on it."

Uber Eats launched in 2015 and now operates in 520 cities in 42 countries. The company works with more than 200,000 restaurants worldwide and says it has a global average delivery time of 30 minutes from order to delivery.

"Being able to launch drone food delivery within the Uber platform I think is that much more powerful and will make it sooner to come to market."

Drone food delivery tested at SDSU prior to city-wide launchUncategorized 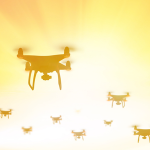 U.S. geospatial data could flow to China via dronesUncategorized