NEW DELHI: Using military solutions against "rogue drones" in a civilian environment is not going to happen and, in the end, only drones will be deployed to counter such aircraft, a senior official of French defence conglomerate Thales said.
Alex Cresswell, executive vice president, land and air systems, Thales, said laser-directed energy weapons, missile solutions and radio-frequency (RF) jamming devices were being asked for in India as counter-drone measures.
"A lot of people (in India) are asking for drone countermeasures without really understanding how difficult it would be to actually use the things that they are asking for," Cresswell told PTI.
Asked what kind of demand is there for electro-optical devices and laser energy devices from India, the official said: "There are lots of requests for them and I am not sure that all the (people with) requests have thought through the limitations on their use."
To use an electromagnetic pulse or a very strong RF to deal with rogue drone, one would have to fly a legal drone out and then use it to deploy radiation in a limited area, he said.
"You can do it very very locally," Cresswell said. "Otherwise, you just bring a whole area to a standstill and that doesn't work. And Gatwick illustrated that doesn't work."
Gatwick airport, Britain's second-busiest after Heathrow airport, remained closed from December 19-21 last year when multiple rogue drones were seen flying over the perimeter fence.
"Gatwick (airport) bought an Israeli counter-drone solution the next day (of the incident) and they never switched it on. Because they can't transmit laser radiation in a built-up area and they can't transmit RF on the mobile phone (which is operating the drone). So, they can't jam it (rogue drone)," Creswell told PTI.
Transmitting the RF to jam the mobile — which is operating the rogue drone — will cripple the mobile phone operations of the entire area.
"So, they (Gatwick airport) have bought a system without thinking about whether they could use it. And this is the same being repeated all over the place," he said.
The Indian Ministry of Civil Aviation has issued a national counter rogue drones guidelines on Tuesday, stating that a counter rogue drone system "must be able to tell the difference between those (legal) drones and a single rogue drone that is operating with malicious intent to avoid fratricide".
The number of illegal drones in India is likely to be between 50,000 and 60,000, co-chair of a FICCI committee on drones Ankit Mehta had said on Tuesday.
According to the Thales official, one can fire a missile or use jammers to deal with a rogue drone in a military environment, but the technology to counter such drones in a civilian environment is yet to mature fully.
"There are lots of people talking about military solution in a non-military context, and to me, it is just not going to happen," Creswell said.
"In the end, the measures against (rogue) drones… will most certainly be using (legal) drones to counter (rogue) drones. I believe that it will be a long-term solution in a civilian environment," he said.
When asked if Thales is working to develop such technology, Creswell replied: "Drones to counter drones, yes, we are absolutely working on that."
But, he added, that these technologies were not yet in the state of maturity where they can be deployed.
Creswell said the company was currently deploying the second version of its holographic radar — which can detect drones up to 7 km — at Charles De Gaulle airport in Paris.
Asked about the demand from India regarding these holographic radars, Cresswell said: "We have got proposals for this radar in at least two places (airports) in India… I am pretty sure that we will see many more in the forthcoming months."
These holographic radars will help in detecting the drones in 7 km of area and the authorities will then have to decide on which counter-drone measure to deploy to neutralise the rogue drone.
Read more ondronesradarHeathrow AirportGatwick airportthales groupElectromagnetic pulseFrench defence 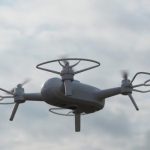 Best Tech Gifts for Kids of All AgesUncategorized