STUFFThe Government is looking at tightening up the rules around drones.

Drones could face tighter restrictions as the Government assesses what it can do about rogue and dangerous operators.

Briefing notes released under the Official Information Act showed the Ministry of Transport was looking to follow Europe's stricter drone regulations after an increase in complaints to the Civil Aviation Authority (CAA).

However, changes to the rules on drones can't come soon enough for some residents in Auckland.

Auckland resident Tina Hart said she felt her privacy had been violated by a drone that was hovering around her Te Atatū Peninsula house on October 9.

"I was looking up at the sky and saw it. We have a two story house. It came right in close, it was turning left and right and looking all around."

She closed the curtains, and waited for the aircraft to go away.

The next morning, Hart noticed a $4500 statue that stood as guardian to her home was stolen.

"My husband is from Wellington and it's a maquette for Solace in the Wind by Max Patte," Hart said.

"We thought about not putting it in the garden but it's one of those things that needs to be in the wind."

Hart said there were no more copies of the statue available for sale, and she was now much more wary about drones.

"It's so violating. It's out of reach but in your space."

The growth of drone usage has also raised significant safety questions for other aircraft.

In the first seven months of 2018, the CAA received 268 complaints over drones.

During that period, 104 complaints were related to privacy while 35 were near misses with aircraft – almost matching the previous year's total for near misses.

The numbers have increased dramatically over the past five years.

Air New Zealand has been vocal in its calls for tighter regulations after potentially catastrophic near misses between drones and passenger aircraft.

In the July briefing notes sent to Associate Minister of Transport Julie Anne Genter, the ministry's advisors suggested new drone rules in the European Union (EU) could be applied here.

The EU's rules included requirements around the aircrafts' technical capabilities, owner registration and a remote identification transmitter that transmitted data, including the position of the drone and the operator's registration number while in-flight.

The EU-wide rules were adopted in June 2018 and New Zealand was waiting to see how effective the changes were in encouraging better compliance from drone operators.

Work by the ministry and Civil Aviation Authority was looking to maximise benefits of advanced commercial drones while managing the risks with smaller drones, mainly used for recreation, he said.

Drone operators who breach the regulations can be fined up to $5000. 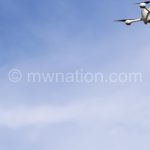 Why 5G, AI are game-changing technologiesUncategorized