Drone deliveries are finally coming to the United States in a very limited way.

The drone delivery service from Google’s parent company Alphabet will launch a delivery pilot in a small Virginia town next month.

Wing has partnered with Walgreens to deliver food, beverages and health products within minutes in Christiansburg, Virginia. The pilot will mark the first time a major tech company has made drone deliveries to homes in the US.

Wing CEO James Ryan Burgess told reporters on a conference call Thursday the test will help it improve the service and build relationships with communities. Wing has not said how many deliveries it will make per day, or how many of Christiansburg’s 22,505 residents will be eligible. Interested customers must live in select areas and can sign up on Wing’s website.

The company said it selected the town because it’s worked closely with the Mid-Atlantic Aviation partnership at nearby Virginia Tech, which is part of an FAA program to ease drones into the skies safely.

“We still have a ways to go before it’s the norm in our transportation networks,” Burgess said on the call. “There’s a lot of sensitivity and concern about the technology, understandably.”

In April, Wing received a critical Federal Aviation Administration certification, allowing it to make commercial deliveries in the US.

To date, the largest drone delivery operations have happened outside the US as regulators in the country continue to develop rules for drones. Wing has already started deliveries in an Australian suburb.

Meanwhile, Zipline, a Silicon Valley-based startup, says it’s made more than 20,000 deliveries of medical supplies in Rwanda and Ghana.

Amazon sparked interest in drone delivery in December 2013, when CEO Jeff Bezos said drone delivery was likely four or five years in the future. Amazon has since announced improved drones but has yet to make regular deliveries anywhere.

Burgess said the 10-pound Wing aircraft, which will carry up to three pounds, is quieter than a car or truck. The company has made efforts in the last year to reduce its noise, which may be a point of frustration for local communities.

Packages are lowered from the drone to a person’s yard via a rope. Whether a package lands on a person’s front or back yard depends on the suitable delivery zone.

Burgess addressed privacy concerns that may arise, such as whether people are being filmed in their communities and on their private property. It’s common for drones to have high-definition cameras. The Wing drone features a camera facing downward to capture black and white footage to help with navigation. He said the resolution is too low to recognize people on the ground. 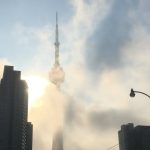 How hi-tech sensors on buildings, cars and in the sky could help keep Toronto’s air cleanUncategorized