Get today's popular Digital Trends articles in your inbox: Why it matters to you

If you fly your drone sensibly, the proposed technology should never affect you, but law enforcement could find it useful for tackling rogue flights.

The proliferation of consumer and commercial drones in the last few years has unfortunately mirrored a rise in incidents of the flying machines going places they shouldn’t. Think airports, prisons, and events where large amounts of people are gathered.

With these potentially dangerous flight incursions in mind, governmental authorities are seeking an effective method to identify drones and their owners remotely before deciding whether to attempt a takedown using other equipment, a maneuver which itself can prove risky, especially if there are large crowds in the vicinity.

The Federal Aviation Administration (FAA) recently wrapped up the first of several specialist meetings focusing on the issue of drone ID and tracking solutions, with input from more than 70 companies and organizations linked to the drone industry or with an interest in its development.

DJI, for one, has already been exploring a system that can allow law enforcement officers on the ground to ID a drone in the air. Proposed in March, DJI’s “electronic identification framework” would cause a drone to transmit its location and registration number using radio equipment that’s already built into many drones and could be easily adopted by other manufacturers. DJI said that while anyone with the proper receiver would be able to obtain the transmissions from the drone, only law enforcement officials would have the ability to identify the owner via a database.

“DJI understands that accountability is a key part of responsible drone use, and we have outlined a proposal that balances the privacy of drone operators with the legitimate concerns authorities have about some drone operations,” DJI’s Brendan Schulman said at the time. “This is another example of how the UAS industry is innovating solutions to emerging concerns, and we look forward to working with other stakeholders on how to implement the best possible system.”

Of course, for a system that identifies drones in flight to work effectively, all of the flying machines would need to be registered. That’s an issue right now, as a federal court in June dismissed a registration rule for non-commercial drones, a rule introduced by the government in December 2015. But as Recode points out, the registration rule may not be dead and buried as legislation aimed at restoring it is currently moving through Congress.

If and when everyone has to get their drone registered, the plan to enable law enforcement to ID drones from a distance using special equipment can move forward with a greater prospect of becoming a reality. 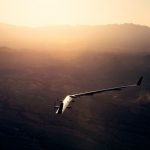