The Kansas Department of Transportation received the green light from the Federal Aviation Administration to conduct a unique drone flight.

This flight will be performed beyond the visual line of sight, meaning it will fly past the operator’s ability to monitor it from the ground.

This flight is a result of efforts by the Kansas Unmanned Aircraft Systems Integration Pilot Program team. The team is made up of 31 members who have made the further advancement of drone technologies their mission. They, along with K-State Polytechnic University, Westar Energy, Iris Automation and KDOT, have now been approved for a 9-mile flight beyond the visual line of sight with a goal of inspecting and evaluating the power lines in a rural area of the state.

“The UAS industry has worked over 10 years to demonstrate the most significant commercial benefit of drone operations within the United States,” said Bob Brock, KDOT director of aviation. “We are proud of the joint state, university and industry team effort that made this landmark decision possible.”

The FAA has been known to give partial waivers in regards to visual line of sight aerial operations and has been doing so since 2016. In fact, K-State Salina received one back in 2018. Those waivers, however, have required at least ground-based radar, limiting the flight area of operations. What makes this unique is that the UAS will utilize Iris Automation’s Casia’s onboard detect-and-avoid systems as the sole means of collision avoidance.

“The ability to fly BVLOS missions without ground-based radar or visual observers is a significant advancement, and Westar Energy views this as an opportunity to play a key role in shaping the future of UAS operations within the utility industry,” said Westar Energy senior UAS coordinator Mike Kelly. “Being able to operate under this waiver allows the Kansas IPP team the ability to research and develop truly scalable BVLOS UAS operations for the automated inspection of linear infrastructure.”

A UAS that is flown BVLS is flown by a ground control station linked to an autopilot system on the drone. This comes with its own set of challenges. The polytech’s Applied Aviation Research Center will be responsible for training the team from the KDOT IPP. It will also be in charge of flight operations in the following months.

“The FAA restriction is founded on their high standard for safe aviation operations in the National Airspace System. Operations beyond the visual line of sight of the operating crew demands a high safety standard to ensure the operation does not pose unacceptable risks to people in the air and on the ground,” Carraway said. “Many operators have requested the type of approval we received, but they were denied because they did not propose an appropriate set of risk mitigations, referred to as a ‘safety case’ to ensure those operations did not pose undue risks. We were successfully because we were able to compose a safety case that the FAA found acceptable.”

On the other hand, being able to fly without a pilot on board has its safety advantages, too.

“Flying rural missions like these without a human pilot onboard or costly radar on the ground is exponentially safer and more cost effective,” said Iris Automation CEO and co-founder Alexander Harmsen. “The FAA is trusting us to pave the way for a safer, scalable future together with this precedent-setting second approval of our system.”

The K-State team was a logical choice for this project. Back in July it partnered with the UAS company Simlat to begin BVLS simulator training. The partnership allowed the school to expand upon what it already offers in its UAS courses, but also in beyond line of sight knowledge base. It is a seven-day program that included ground instructions and hands-on experience. The simulator allows the trainee to build flight plans as well as transition from simulation to active flight seamlessly, while experiencing various flight conditions and scenarios.

“As a key partner with the Kansas Department of Transportation on the IPP, we will serve as KDOT’s UAS training provider, to work with other partners such as Westar Energy to train them in flight operations under the provisions set forth by the FAA,” Carraway said. “Additionally, as educators and trainers, Kansas State Polytechnic will expose our degree-seeking students to the training necessary to conduct beyond visual line of sight operations safely. We will also create a short course for our industry partners to receive training in a beyond visual line of sight environment.”

BVLS has been a goal for some time. Beyond visual line of sight technology could have a lasting impact on industries from agriculture to sales and marketing. Amazon has been using drone delivery methods in the United Kingdom for years. Ensuring it can be accomplished safely in the U.S. is a priority.

“While this waiver was one of the cornerstones of the UAS Integration Pilot Program, our researchers have been working towards this for years. This authorization will allow us to demonstrate safe operations beyond visual line of sight,” Carraway said. “The data we gather during these operations will be shared with the FAA and will ultimately set the benchmark for creating a pathway for other aviation professionals to receive similar authorizations.”

The military has been taking advantage of this technology for some time. Since the mid-1990s, unmanned aerial vehicles have been utilized as such. Intelligence missions, especially in combat, have been conducted using drones. They allow for information gathering without the risk of losing a human pilot in the process. Kansas is now a part of the first steps in making this technology available in a civilian capacity.

“We look forward to leveraging this waiver to integrate UAS technology into the transmission line inspection process,” Carraway said. “We are certain that utilities will be able to quickly realize a return on investment while mitigating safety to their maintenance personnel and increasing the reliability of their infrastructure to the general public.” 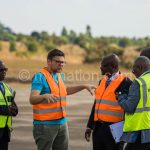