MIAMI – Whirring sounds accompanied by the laughs and shrieks of kids filled the air as a drone flew overhead.

Nearly 10 years ago, only the military or police had this technology.

Recently, students in the After-School All-Stars (ASAS) summer camp at Ruben Dario Middle School, flew mini-drones through hula hoops and over their school’s roof as part of a program called Discover Drones.

Since June 10, more than 60 students have learned how to operate a drone and navigate obstacles through computer software. The kids built their own drones and flew mini ones for the first time in the school’s recess court.

The program is a collaboration between ASAS South Florida and Florida Power & Light Company (FPL), which aims to expose youth to the world of innovation through technology.

“We want to immerse students in as many career possibilities as possible,” said Richard McKinley, senior program director of ASAS South Florida.

Before students worked in teams on their own, FPL drone specialist Heath McLemore explained how the company uses drones to prevent outages and restore power.

The company flew drones around South Florida power lines to survey possible damage in the aftermath of Hurricane Irma in September 2017, keeping workers away from hazardous debris and mapping hard-to-reach sites.

Ears perked up in the classroom when he noted that teens as young as 16 can become commercially certified drone pilots and work the company’s drones.

“I think I want to be a drone pilot now that I know I can in a couple years. Then, I’m thinking of going into the Air Force,” he said.

Given this year’s success, ASAS, which is a national organization that hosts academic and extra-curricular after-school programs for middle school students, is looking to expand in the future, according to McKinley.

“FPL has been a great partner and continually works with us to provide more opportunities for the students and families in our community,” he said. 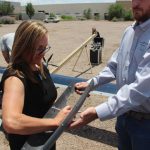